‘Contempt for flowers is an offence against God. The lovelier the flower, the greater the offence in despising it. The tulip is the loveliest of all flowers. So whoever despised the tulip offends God immeasurably.’

In 1672, Cornelius and Johan de Witt, brothers and prominent citizens of Holland were charged with treason and sentenced to exile. Cornelius had been tortured in the hope that he would confess to plotting with the French king, but he said not a word. He was guilty but he was safe in the knowledge that the evidence was safely hidden.

His silence did not save them. The authorities, and William of Orange in particular, wanted rid of the troublesome pair and so they manipulated the situation. The two brothers were lynched by an angry mob early on their journey to their place of exile.

The opening chapters of the story were a little more difficult to follow than I had expected, but I kept going because it was Dumas, because I understood that this was real history, because I knew there would be tulips, because I had read much that was positive about this book, and because I’d had in mind for my 100 Years of Books for quite some time.

I’m glad that I did. 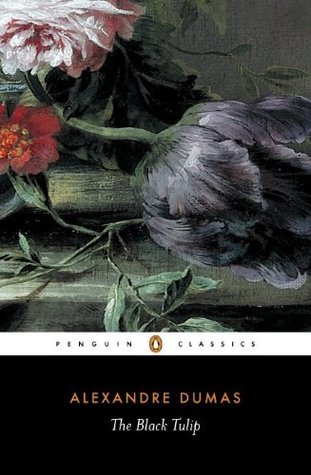 The story moves to Cornelius van Baerle, a wealthy young man who lived quietly in the country and devoted his life to his tulips. He studied them, so that he could grow the very best flowers and develop new varieties. When the Haarlem Tulip Society offered a prize for the first black tulip presented to them, Cornelius set to work. Not for the prize, not for the glory, but for the chance to introduce such a flower into the world.

Cornelius van Baerle was the godson of Cornelius de Witt, but he had followed his father’s advice to steer clear of politics; and that may be why when his godfather asked him to be the custodian of a packet of letters he accepted readily and put it away safely.

His neighbour didn’t know that, but he had seen the visitor and when he heard the news of the murders he denounced his rival to his authorities. The packet was discovered just where Cornelius had put it, and his protestations that he had no knowledge of the contents were greeted with disbelief.  He had just enough time to hide his three black tulip bulbs in his clothing before he was taken to the same prison where his godfather had been held.

Rosa, the beautiful and spirited daughter of Gryphus, his brutal jailor, came to love Cornelius. She feared that he loved tulips more than her, but she loved him more than enough to do everything she could to help him to grow his black tulip in secret. He did love her, but he knew that his future was uncertain and so he was unwilling to say or do anything that would confirm his feelings.

Neither of them knew that Boxtel was close at hand, plotting and scheming to capture the bulbs.

Cornelius knew that he might not live long enough to see his black tulip flower.

He thought of the beautiful tulips which he would see from heaven above, at Ceylon, or Bengal, or elsewhere, when he would be able to look with pity on this earth, where John and Cornelius de Witt had been murdered for having thought too much of politics, and where Cornelius van Baerle was about to be murdered for having thought too much of tulips.

The story that plays out is captivating,  it is  wonderfully readable, and this short novel holds a great deal more than most other books with similar proportions. Every character, every incident, every dialogue, has its purpose; and the plot, a lovely fiction spun around real history, is very well built by a very fine craftsman.

There are echoes of his other work, it is recognisably his work, but it is also quite distinctive.

There is a beautifully handled romance, there is wonderful suspense and intrigue, there is a nice dash of comedy, and there is a race to present the black tulip that leaves the outcome for all concerned in doubt to the very end.

The conclusion ties all of the plot strands together, and a little glimpse of what the future held was a lovely final touch.